Irv, we hardly knew ye: We say 'So long' to our partner in All The Presidents' Movies 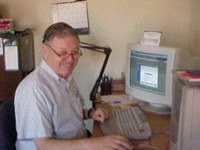 We just found out that Irv Letofsky died on Sunday at age 76. Irv was a television critic for The Hollywood Reporter and former editor of the Los Angeles Times Sunday Calendar section. He was also an executive producer of the Frozen Pictures documentary series, All The Presidents’ Movies.

Irv was an important collector of film lobby and title cards and other film memorabilia, and brought to our attention the story of Paul Fischer, the White House projectionist who was at the center of the acclaimed Presidents' project.

Irv is also thanked in the acknowledgment section of Burt Kearns’ book, Tabloid Baby.
Posted by frozen at 8:43 AM