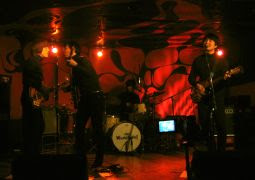 Innes-influenced indie acts
get international exposure
in "The Seventh Python"

HOLLYWOOD (JONAS PR) -- A folk-rock musician from Moscow and an offbeat tribute band from Tokyo are getting their first international exposure through their surprise inclusion in The Seventh Python, the acclaimed musical biopic of satirist, Monty Python collaborator and Rutle Neil Innes, that heads to an exclusive showing at the Chicago Fest for Beatles Fans on August 9th.

Roman Shebalin is featured in the Frozen Pictures film, singing a Russian-language version of Innes' signature song, How Sweet To Be An Idiot.

From the rock ‘n' roll nightclubs of Tokyo, Rutles tribute band The Mountbattens are shown performing I Must Be In Love, a classic song from the Rutles album and mockumentary, All You Need is Cash.

'We first heard and saw Roman's work on YouTube while we were in post-production,' says Seventh Python director Burt Kearns. 'He's a passionate performer and he's made it a crusade to spread Neil Innes' work in a part of the world that knows him even less than here! He's a great example of how Neil's work has spread across the globe, and how fans in distant places are united, thanks to the Internet.'

'The Mountbattens make pure, perfect pop music," says producer Brett Hudson, 'The fact that they're playing Rutles music and not the Beatles, capturing every nuance and in sound and performance, is totally bent! And truly a tribute to Neil's talent!'

Both performers have atttracted strong word-of-mouth since The Seventh Python premiered June 26th as the opening selection in the Mods & Rockers Film Festival in Hollywood. They managed to grab attention amid the brilliant starpower of Innes, John Cleese, Eric Idle, Terry Jones and Michael Palin, Terry Jones, and, in his introduction to the US and world stage, the hilarious comic and Innes compadre Phill Jupitus.

Shebalin, 37, who founded the first Russian fansites for bands including the BeeGees, is also an artist, published poet and author, and a founder of the post-punk, minimalist, avant-garde band, Nav. His main instruments are acoustic guitar, synthesizer and bagpipes.

The Seventh Python, hailed by the Los Angeles Times as 'charming and illuminating,' will be presented August 9th in a special 11:30 a.m. screening in the main ballroom of the Hyatt Regency O'Hare Hotel amid the Fest for Beatles Fans. Neil Innes will be there for the showing.
Posted by frozen at 6:00 PM